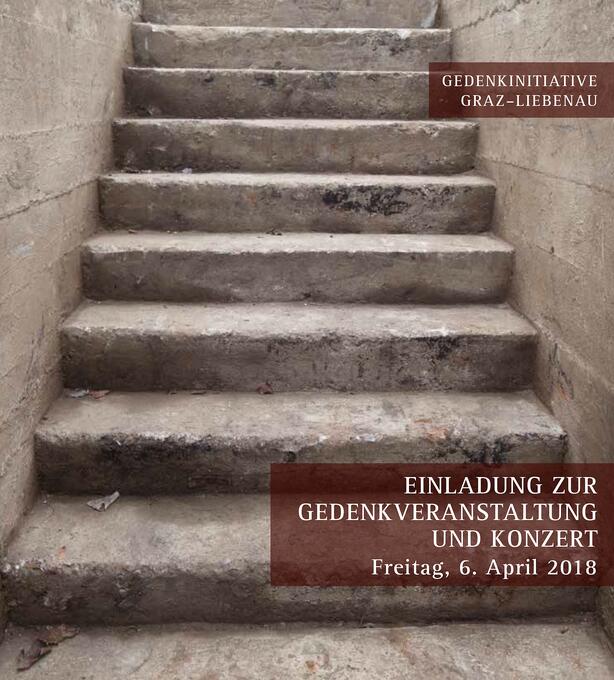 „The process of coming to terms with the past has gradually been replaced by the wish to preserve the past. It begins with the conclusion that guilt never ends and the damage is done. There is no reparation or reconciliation, only solidarity in remembrance.“
(Brandenburgische Akademie der Wissenschaften 1999)

“Remembrance has no end – people can be expected to know the truth about the Holocaust in Graz!”

The killing of around six million of Jewish, Roma, Sinti, homosexual, handicapped people must not be forgotten. The least what the following generations can do is taking responsibility and ensure restoration of historical memory and dignity for the victims.

Never before has the Austrian Freedom Party FPÖ been infiltrated by student fraternities (Burschenschaften) as strongly as today. Out of 51 delegates to the National Assembly of Austria, 17 are members of German-national associations (33 per cent), among them five out of nine governors of Austrian provinces. They hold an absolute majority in the party executive of the FPÖ.

Austria is said to be home to 4,000 German-national frat members (26 January 2018), experts count 150 corporations and other groupings. Traditional strongholds of these fraternities are the two university cities Vienna and Graz. The importance of linking history with the present day is evident when considering the hatred, agitation and extremism that is no longer only found in the right-wing margins but meanwhile at the very heart of our society.

Extreme-right printed media, such as the “Aula” magazine, right-wing frat members and, increasingly, politicians at the national and regional level have lately contributed to making anti-democratic, xenophobic and antisemitic thoughts socially acceptable and are slowly beginning to undermine democratic core principles.

Therefore, events of remembrance are here to enable people – and especially young people – to discuss the past, urging us to stand up against antisemitism and extremism in any form.

1940
Construction of the camp for so-called “ethnic German immigrants” from the Danube region, by the “Volksdeutsche Mittelstelle” (Coordination Centre for Ethnic Germans)
1941
Sale to the Steyr-Daimler-Puch works (engines, gearboxes, tank parts) as a camp for 5,000 forced workers and collection camp for people from other near-by camps (“Russian Camp”, “Convict Labour Camp Thondorf”, “Neudorf Camp”)
1945
Graz is the organisational centre for the death march of Jews from Hungary. The first transport of Jewish men and women to the Camp of Liebenau took place at Easter 1945. 7,000 to 9,000 people were driven toward Mauthausen; a total of 7,000 on 4th April alone. Hundreds of them were murdered in Graz and rapidly ‘buried’ in bomb craters.
1945
Sale of the premises to the City of Graz “with all legacy issues”. Accommodation for German refugees, later hut barracks for the poor.
1947
“Liebenau Trial” and exhumation of 53 victims. Involved in the killings were Gestapo, SS and Werkschutz of the Puch works. Three perpetrators were sentenced to death and executed, no further trials took place.
1991
During the construction of the municipal kindergarten at Andersengasse 49, two victims were recovered within the “lager premises” under strictest secrecy and autopsied by forensic medicine. No other legal measures followed. No information about the whereabouts of the bones was provided.
2011
Publication and dissemination of the research results from 2003 regarding the “Liebenau Trial” by Univ.Doz. Barbara Stelzl-Marx on occasion of the planning of the power plant on the river Mur.
2012
Start of our own research on site with access to and photo documentation of the NS cellar at Andersengasse 32-34.
2013
Multi-temporal analysis of aerial views (aerial view database Dr. Carl) with localisation of possible mass burial sites. We transmitted this documentation to the Federal Monuments Office (BDA) as a basis for further measures to be taken by the BDA.
2014
Archaeological peer opinion by Univ.Prof. Claudia Theune-Vogt, Dean of the Faculty of History and Cultural Sciences (unpublished).
2015
Aerial photogrammetric opinion, Dipl. Ing. Fuxjäger / ADP-Rinner, localisation of suspected areas to the nearest 50cm.
Documentation of remainders of two opened and cleared bomb craters (Wiki-Jugendzentrum, former Konsum market).
2015
Declaration of the Grünanger and the area between the Petersbach river and the Seifenfabrik (including its premises) as “archaeological site”.
2016
Cellar in Andersengasse 32-34 listed by the BDA as “historic site”.
2017
Archaeological excavations conducted as part of the construction site for the power plant on the river Mur.
Extensive camp structures were uncovered in this process (bunkers, barracks foundations, finds, graffiti of victims and/or perpetrators).
Bunker premises with graffiti listed by the BDA as “historic site” (meanwhile built over with a youth centre).